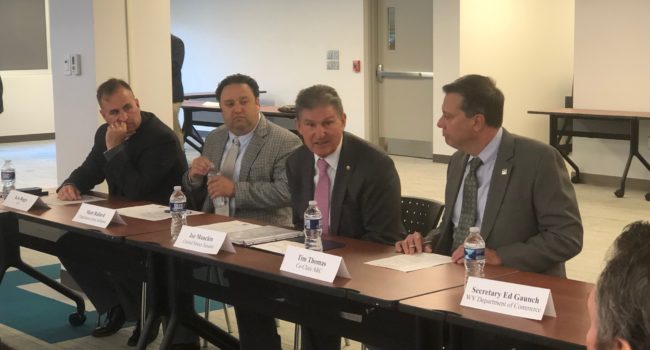 U.S. Senator Joe Manchin (D-W.Va.) took Appalachian Regional Commission (ARC) Co-Chair Tim Thomas around the state to meet local leaders and entrepreneurs looking to grow in many sectors. The pair’s first stop was at Toyota Advanced Tech Center in South Charleston where discussions took place about $8 million in recent ARC POWER Grants and $83 million in ARC funding since 2015. Recipients of those recent grants told their stories to Manchin and Thomas and the group formed ideas for growth in the future.

Around two dozen leaders from the state technology sector gathered at Hendrickson Hall on the campus of BridgeValley Community and Technical College mid-morning Friday for a roundtable on the industry**. Representatives from N3, Infor, the Rocket Center, and other tech firms were there to tell Thomas and Manchin how they are working and what they need.

Many expressed the need for federal investment in broadband infrastructure and workforce development, including Manchin. He told MetroNews that he wants to have West Virginia ready when 5G service is ready.

Manchin said there is $20 billion in federal money being spread out throughout the United States for broadband and connectivity. The money will be distributed based on coverage maps by the FCC and Manchin encourages citizens to help challenge the commission’s maps.

“They are showing areas that they say we have coverage and we don’t,” he told MetroNews. “We are asking everyone to do their own speed test, you get can go and do the test, turn it in to us or the FCC so we can show them their maps are flawed.”

Following the tech and broadband talk, Manchin and Thomas headed on a walking tour of the Elk City District in Charleston. Local business owners and workers chatted with the two to highlight redevelopment in the area.

The two capped off the day with the 48th annual Regional Job and Resource Fair in Beckley. Over 180 vendors packed into the Beckley Raleigh Convention Center.

** Core10's Jen Saul and Ron Smith were in attendance of the roundtable had on Friday morning. They shared Core10's Hereshore® mission with the group and contributed to the discussion around bettering West Virginia's access to technology.

The original Metro News article is by Jake Flatley and photo can be found here.